Welcome,
Welcome to LaRoche's Sewer, Drain and Septic Services. We're glad you found us! Our pledge to you is delivering
QUALITY DEPENDABLE SERVICE ~ SERVICE YOU CAN COUNT ON!

What does your septic system do?

An “onsite” sewage treatment system completely treats sewage on the property where the sewage has originated.

This system has two parts: sewage tank and soil filter. The sewage tank separates out the large solids, and the soil filter removes the fine solids and destroys accompanying bacteria. The only maintenance required by a properly operating system is the occasional removal of accumulated solids from the sewage tank.

A sewage tank may be a septic tank or an aerobic tank (with an air agitator). In both, the large solids are separated and partially decomposed by bacteria. The liquid discharged from these sewage tanks is called effluent. This effluent contains disease-causing bacteria and nutrients. Minnesota law prohibits discharging this effluent onto the ground surface of into surface waters, except in rare instances when a permit must be granted by the Minnesota Pollution Control Agency (MPCA).

About the Septic Tank

The most common type of sewage tank in Minnesota is the septic tank. Raw sewage flows into the septic tank where the solids separate from the liquid. Solids such as soap scum and fat float to the top and form a scum layer. Heavier solids settle to the bottom where they are partially decomposed by bacteria. The non-decomposed solids remain as the bottom sludge layer. The solids which are trapped in the septic tank must be removed by pumping before they build up to a level where they will wash out into the solid treatment system and plug the soil pores. The septic tank should be watertight, corrosion proof and constructed according to the dimensions in the figure. A shallow tank with adequate access is easy to maintain.

Except in rare instances when a permit is granted by the MPCA for surface discharge, sewage tank effluent must be discharged into a soil filter – called the soil treatment system. Most soils are excellent filters, but some soils cannot perform this task. 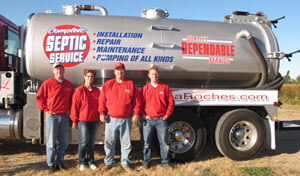 Care and Feeding of Your Septic System

Click here for Detailed Diagrams & Explanations of your Septic System

We at LaRoche’s Services have a computerized maintenance scheduling service in effect so we can keep accurate records for you and also remind you by phone or postcard that it’s time to have your tank routinely pumped.